Last Wednesday we celebrated St Hilda’s Day with a scavenger hunt in Period 4 and a Chapel Service for Years 5 to 12 in Period 6. Our 2020 School Captain, Edwina Thomson gave the address and spoke eloquently about St Hilda’s character and faith. We were unable to sing together because of COVID-19 restrictions but Alana Li and Flora Yang played a beautiful keyboard/cello duet as a musical meditation, while Varvara Litvinova accompanied Airlie Robinson and Charlotte McClintock, who sang Carole King’s “You’ve got a friend”, as a response to Edwina’s reflections on St Hilda. 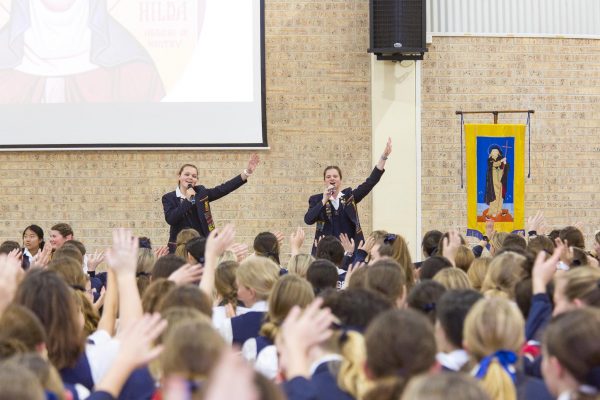 The service itself was led by the 2020 Senior Prefects as one of their last official duties. St Hilda is our patron saint and we are one of two Australian girls’ schools that have her as such. Interestingly enough, the whole continent of Australia lies between these two schools as there is one here in Southport and the other in Perth. There are other schools overseas named after St Hilda and at least one university college in Oxford which was the first university college to take women as undergraduates.

The connection between St Hilda and girls’ education is very strong and this is not only because of her role as an educator but also because of her leadership qualities and wisdom. In a very male-oriented and hierarchical society, in which military prowess was valued above all else, St Hilda stands out not only because of her gender but also because of her qualities of mind and character. The Venerable Bede, the noted scholar and historian, writing in the Eighth Century, said of St Hilda: “her prudence was so great that not only did ordinary persons, but even some kings and princes seek and receive counsel from her in their need”. He also observed that she had innate wisdom and that all Anglo-Saxon England knew of her because of her “wonderful godliness and grace”.

Her patronage of Caedmon led to his producing the first extant English poem which is a song of praise of God as Creator. The quality of St Hilda’s intellect and strength of character is also shown in that she was chosen to host the famous and historic Synod of Whitby in 664 AD, and that she abided by its decisions although those very decisions ran counter to her own position and views. St Hilda is a very fine example of a patron saint for a school and a very fitting ideal for our girls because her life encapsulated our School’s motto: Non Nobis Solum, Not for ourselves alone.