Home > Videos and Conversations > From the Principal – July 2022

The School’s archives preserve some treasured moments in the life of St Hilda’s School. The photo below, taken in 1958, preserves the images of twenty-four students whose mothers had also attended St Hilda’s School. Today, those numbers have grown with many of our families identifying generations of young women who have cherished their formative years at Southport, growing friendships, and forming an understanding of the passions and interests that bring purpose to their lives.

Acknowledging the role of friendships made whilst at school seems appropriate in this our Old Girls’ Association centenary anniversary. Marian Michael (nee Perdiau) attended St Hilda’s in the 1950s. Marian, who continues to be part of the Old Girls’ Association committee, took the opportunity this year to share with us her reflections on not only her time at school, but also to share how the longevity of friendships made, have had such a significant influence on her life.

My friends in school were like my family. We had all been sent to Boarding School in Southport, Queensland for one reason or another. Certainly, for me the education was far more extensive and far reaching than it would have been in the small country town of Kyogle NSW where my family lived.

I met amazing girls and made life-long friends. Most girls had come from Western Queensland where they lived on properties with their families. We all missed home but quickly grew very independent and made a new life for ourselves which marked our life.

I have kept a group of very close friends over 70 years. We have all lived very different lives but all strong and independent women who have made the best of what we had. I give thanks to my parents for sending me to this wonderful School, St Hilda’s Southport.

One of the most memorable events of my four years at St Hilda’s was in my Junior Year (now Year 10) when the Boarders in my year were relocated over at The ‘Overflow’. Presumably there was not enough room in the main school. We loved the extra independence of being “out of bounds” and when a cyclone crossed the coast at Southport it was really exciting. For three days we were not allowed to cross the road to the school. Some brave person had to ferry our meals over – and of course no lessons. The cyclone was quite violent, but I don’t remember it being frightening.

By the time I was in Year 12 we had only six Boarders. We’d been together for four years so, not surprisingly, were like sisters. We remain friends to this day and try to get to Old Girls reunions every five years. 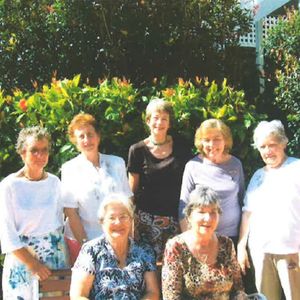 Whilst Barbara attended St Hilda’s in her final years of secondary, another friend from this era, Page Neill, came to the School as a 6 year old to board.

My mother had attended the School in the 1920’s when Miss Fittock was Headmistress, so no doubt that’s why I followed on. Also, at that time, St Hilda’s and TSS seemed to be the schools of choice in the district – Roma, where I was born.

Quite a contingent from both schools travelled by train (steam) at the beginning and end of each term, quite confidently as an unaccompanied group. We all knew each other, and the older students looked after the young ones.

I had started my schooling by mail from The Queensland Correspondence School in 1954, but my mother needed surgery, my young sister was 3, so off I went to boarding school, supposedly for a year, but in the end, ten!

These were the early years after World War 2, virtually no bitumen roads out west and certainly no 4×4 vehicles. My parents’ generation was in recovery mode after some very tough war years, so travelling down to see us during term did not happen. There were three terms then not four, and a number of us spent the Easter break at school. St Hilda’s was virtually in the bush in the 50s and Southport, a seaside town. It was a great school for outback kids and the boarder/daygirl ratio was probably 60:40.

I started school in 1945 at Southport State School. I got chicken pox and measles one after the other and got the cane for staying away. So, I finished the year at the convent. Started at St Hilda’s in 1946 and finished in 1956.

The School year had four terms so I only went to Springsure twice a year August and Christmas. To get home was two days and two nights in the train. No food on the train so when the train stopped to let people off the train, the cafes on the platform were open, so it was always a rush to get something to eat no matter what time of day or night.

The holidays of Easter and Michaelmas you either stayed at school or went to a friend’s house. The friend I went with was Beverley Webster and we are still friends.

I was one of three Kyogle girls attending as a Boarder in 1953. I was born in Kyogle NSW in August 1939 just before the outbreak of World War Two. My parents owned a dairy farm some six miles (10km) from town. I was enrolled as a Boarder at St Hilda’s in 1953 as the doctors thought that the sea air may improve my asthma, which it did to a degree.

I enjoyed Boarding school and have fond memories of times spent on the Assembly Hall roof on the weekends or down by the oval on our rugs. Miss Horton, our Head was very strict, but I always thought fair. Life in the 50’s was certainly very different from today, The Good Old Days!!!

The memories of our Old Girls provide us with a window into the history of the School and how families, in many ways, continue to share similar hopes and aspirations for their daughters. From the point of view of these wonderful women who have remained friends for more than half a century, they epitomise what we want for all our daughters – good friends, good memories, and strong connections.

Friendship is a theme that was certainly evident in the beautiful works submitted this week for the Principal’s Visual Arts Awards. The chapel is housing an exhibition of all work entered by students from Pre-Prep to Year 12. The exhibition will remain in place until the end of our Open Morning on Saturday 30 July. I will write next week with photos, sharing the work with you, and an account of our celebrations with our visiting Old Girls.

For those attending the first Rowing Regatta on Saturday, I look forward to sharing this day with you. My deep appreciation for the tremendous organisation that has taken place, and the long hours volunteers have given, as we have prepared to host and cater for this first round of competition at Wyaralong Dam. Best wishes to our rowers who have prepared over the course of a term, followed by two camps, for this challenging competition. To those at home games – it was a pleasure to see so many of our students on the court last weekend and I’m sure Round 2 of Winter fixtures will be equally rewarding. Sunday, we celebrate the talents of our musicians and vocalists at the Music Gala. We have appreciated the engaging sound emanating from the BPR and the Chapel throughout Semester One and look forward now to settling into the Annand Theatre to experience your joy and talents. I look forward to sharing these events and other markers of the girls’ journey through their schooling with you.