Home > About Us > Non Nobis Solum

The spirit of St Hilda’s shines when the actions of students of all ages reflect their school motto, Non Nobis Solum – Not For Ourselves Alone. Each year, selfless acts include raising funds for the Anglicare Crisis Centre at Surfers Paradise, Abri Aged Care, Paradise Kids and the Cancer Foundation, to name a few. Students also strive to be global citizens, raising awareness of marginalized communities and participating in global aid and community projects.

Amnesty International is an organisation that raises awareness regarding violations of human rights on a global scare. Amnesty gives students a voice to see that they can actively participate in protests against abuses.

The Amnesty and International Groups within the school have been working hard organising awareness campaigns throughout the school. This is all part of the greater global movement of Red Hand Day, which encourages governments to take initiative to stop the use of child soldiers. Part of the action that is being taken by St Hilda’s in relation to Red Hand Day is to spread awareness of this issue beyond the school and into the wider community, by inviting a former child soldier to come and speak at the school. We were extremely fortunate to have Deng Thiak Adut, who experienced these horrors first hand, share his story. Now a defence lawyer, author and named Australian of the year finalist, his experiences are part of one incredible survival story. Ultimately, he is one of the lucky ones, as most child soldiers never m 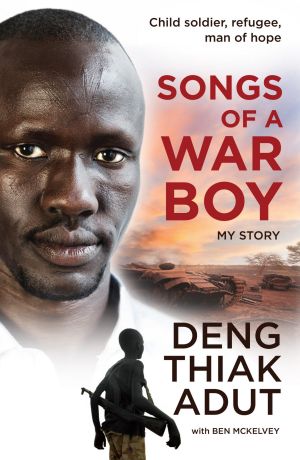 ake it out of war.

As a school community we were delighted to welcome Defence Lawyer, refugee advocate and author Deng Thiak Adut to St Hilda’s School. As part of our School-based ethics focus Deng spoke to all Middle and Senior students at a special assembly. Deng had also generously agreed to lead a wider discussion with members of the community at an ticketed afternoon event.

Deng is a Sudanese child soldier turned western Sydney lawyer and refugee advocate whose harrowing tale of his personal journey as a refugee has evoked strong emotions among Australians.

Born in South Sudan in 1984, one of eight children, Deng was conscripted as a boy soldier at just six years old before going to war when he was only 10. Instead of playing games and singing children’s songs he learnt war songs and was taught to love the death of others. He escaped the army in 1995 and arrived in Australia as a 14-year-old refugee in 1998. After teaching himself to read, write and speak English, Deng won a scholarship to study law at the University of Western Sydney in 2005 and graduated with a Bachelor o