“Education does more than prepare for the world of work and wages; it equips people to make decisions based on reasoned judgments and to live responsibly with the decisions they make” (Johnson, 1977).

There is increasing recognition that young people today are growing up in a world characterised by multi-cultural, multi-ethnic and multi-religious plurality. Many commentators contend that such rapid change, particularly within the western world, has resulted in societies with little social cohesion and a diminishing sense of common purpose and vision for greater community good.

The collective values system, traditionally provided by the triumvirate of home, school and church has been replaced by a relativistic culture where ‘anything goes’ (Vardy, 2002). In parallel, ethical questions posed by technological advances raise significant challenges with which young people are ill-equipped to respond (Stevens, 2013).

During recent times there has been growing recognition within Australia, as in other countries, to re-engage youth in meaningful ‘values based’ discussions.  Current educational research testifies to the effectiveness of a comprehensive, holistic educational approach upon cognitive and affective development.

Indeed, the current Australian curriculum calls upon all schools to foster ‘the development of personal values and attributes such as honesty, resilience, empathy and respect for others, and the capacity to act with ethical integrity’ (Australian Curriculum, 2013).

Values Education at St Hilda’s has been a core element of its Anglican educational proposition since the foundation of the school in 1915. Our ambition is to further enhance this vision by providing explicit opportunities for all students, staff and the wider community to engage with comparative perspectives and world views on a broad range of ethical issues from both theoretical and practical perspectives. 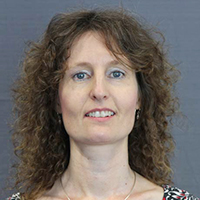 Head of Religious Education and Ethics

Catherine Syms holds Bachelor and Masters degrees in Practical Theology from the University of Aberdeen, Scotland. She later trained as a Religious Education teacher at Moray House School of Education in Edinburgh. During the past 18 years, she has worked as an educator in a variety of secondary schools in the United Kingdom and New Zealand, primarily in the field of Religious Studies. She is passionate about engaging young people in critical discussion and academic debate on matters of religion, philosophy and ethics and believes this is best approached through an inquiry-based methodology. Her position as Director for Religious Studies and Ethics at the Diocesan School for Girls in Auckland provided her with the opportunity to establish New Zealand’s first school-based Ethics Centre; which facilitated ‘thinking about ethics’ across the school community and beyond. Catherine joined St Hilda’s School as a teacher of Religious Education with responsibilities for chapel worship and ethics learning in 2015.