With thanks to our Sponsor:

Ironically, the individual stepping up to this demanding role is perhaps one of the sweetest girls you will ever meet, grade 10 student Yvette Willemsen. Although, you wouldn’t know it from watching her perform. This talented triple-threat steps out of her shell on stage, embodying the hilarious Mrs. Wormwood, a character we all love to hate.

Aside from her wealth of singing and dancing training and experience, perhaps Yvette’s biggest strength is her ability to empathise with Mrs. Wormwood, which to be fair, is not an easy feat!

“She is this crazy, psycho fashionista on the outside, but on the inside, ballroom dancing is her escape,” shares Yvette.

A love of dance is perhaps the primary similarity between Yvette and her character, “Dance also allows me to express myself.” And boy, can she dance!

Yvette has been training in ballet, jazz, and contemporary genres since the age of four, giving her a solid foundation for the Latin dancing she and her partner ‘Rudolpho’ (Ashley Yang) will be getting up into throughout the show.

Dancing on stage is one thing, but having to sing and act simultaneously is an extremely difficult feat. However, Yvette is well prepared. She points to her wealth of musical theatre training as the secret weapon behind her capacity to pull it off.

But talents aside, the primary reason Yvette got involved in the school musical was because of her passion for all things musical theatre.

“The reason I love performing is that on the stage, no one knows who I am; no one can judge me. Being in a character is like an escape from reality.”

And Yvette is correct in that you certainly won’t recognise her when she is up on that stage belting out her solo ‘Loud’. Aside from a crazy blonde wig, Mrs. Libby Gilmore and Mrs. Karen McNamee have been working hard on creating a fabulous Latin ballroom outfit for the number, inspired by a peacock. Not only does this animal embody Mrs. Wormwood’s flamboyance and flair, but the rich blues and purples of its plume will surely stand out underneath the brilliant stage lights. Check out a sneak peek of some early designs and fabrics below.

Yvette is most looking forward to the “euphoria” she feels on stage “with all of the girls with who [she] has created good memories with.”

If you want to share in Yvette’s and the rest of the casts’ euphoria as they sing, dance, and act their hearts out on stage, tickets are now on sale for two performances of Matilda: The Musical on the 14th and 15th May. Click here to book.

Can’t wait to see you there! 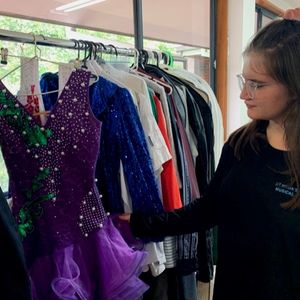 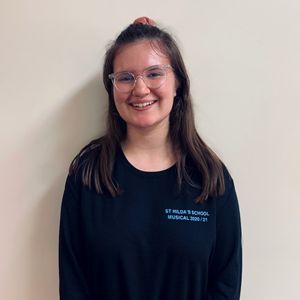 Preparations for Matilda are underway!

Rehearsals for the 2021 St Hilda’s School Musical – Matilda are well underway, with the cast and crew loving their afternoons and weekends jam-packed with singing, dancing and acting.

They are loving every bit of their 15-week long rehearsal process, which will culminate in two big performances on Friday the 14th and Saturday the 15th of May (Week 4 of Term 2).

With the unfortunate postponement of last year’s production due to covid-19, the girls were revved up and ready to go in 2021, surely feeling blessed that they have the opportunity to be involved in a school musical at all.

With St Hilda’s being one of the first Australian schools to gain the rights to Dennis Kelly’s Tony-winning show Matilda, everyone was excited to perform hits such as Tim Minchin’s ‘Miracle’, ‘Naughty’ and ‘Revolting Children’, just to name a few.

After an audition process that saw a wide array of talent, there was a palpable sense of anticipation in the air as the girls waited to find out who would be stepping into the roles of the menacing Miss Trunchbull, everyone’s favourite teacher, Miss Honey and of course, the bright, brave, book-loving Matilda.

And the principal role goes to… MR WINTER (Head of Performing Arts)! Just kidding, although I think he could pull it off.

In actual fact, Year 9 student, Kate Taylor was picked to play the titular role. With her involvement in five school ensembles and outside musical theatre training behind her, this talented performer was undoubtedly an excellent choice.

Look out for interviews with these girls and other leads, chorus and band members, production team, and staff in the coming weeks!

Overall, the school musical experience was perhaps best encapsulated by grade 12 student Alana Li, who stated that, “The best thing about doing the school musical is that it doesn’t matter if your role is big or small; you are part of a bigger team that works together to create something amazing.”

So, mark down the 14th and 15th of May in your calendars, because the St Hilda’s School production of Matilda the Musical is not one you want to miss.