*Congratulations to Madeline Smith who has been selected in the South Coast Netball team. Madeline will be competing at the State Carnival in Townsville in April. Best of luck Maddi!

*Congratulations to Lindsay Engelen who has been selected in the South Coast Tennis team. Lindsay will be competing at the State Carnival in early May on the Gold Coast.

*Congratulations to Alize Yarwood who won the QLD wildcard through to the National Clay Court Tennis Championships in Canberra in April. Alize also won the QLD wildcard back in the last holidays for the Hardcourt Nationals in Melbourne which was held in December. This weekend she has been one of only 20 girls to be invited to the Tennis Australia 15 & under camp which is a big accomplishment considering she is still only 11 years old!

*Lillian Dell from Year 11 and her warm-blooded gelding JC were at Stuartholme College for the Inter-School Showjumping two-day Gala Event at Fig Tree Pocket Showgrounds this weekend. Lillian and JC competed in the Senior School AM5 Class with the initial course at 1:00m and with a 1:10m jump-off. Lillian proudly carried off the second-place ribbon for St Hilda’s. *The Wide Bay Regional Equestrian Championships were held at QSEC March 22-24 and Hannah Collins and her mount Binnowie Rave Review were awarded Reserve Champion place in the intermediate Showhunter events. Hannah will now compete at the Interschools Queensland State Championships held in Maryborough in July. 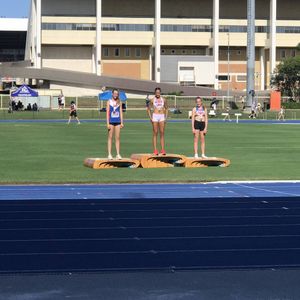 *Congratulations to all our girls who competed at State Athletics in early March. Elle Rutherford placed 1st in both the 800m and 1500m. Nyah Bollinger placed 4th in High Jump and 8th in Triple Jump and Long Jump. Hannah Collins placed 2nd in Triple Jump. Well done girls!

*Congratulations to Olivia Wright and Alexis Cunington who placed 4th and 1st place respectively in a Sailing regatta competition.

*Congratulations to the St Hilda’s students who competed at the Queensland School Sports Diving Trials at Chandler recently. All girls competed very well with the following results:

The St Hilda’s Sport team loves to be kept up to date with our girls’ achievements across a wide range of sports. Please email sport@sthildas.qld.edu.au with any sporting news that we can recognize and celebrate!

7B played a great game and their defense was very good. Aileen Hu played very well showing exceptional dribbling and shooting skills. The most amazing thing to witness was the way the girls cheered for their teammates. The 10A girls had a nervous start to their game. However, at the beginning of the game they encouraged each other and even though they didn’t win, it was still a good game to watch. The Opens team had the skills to compete against St Margaret’s, however, they were not able to come away with the win. Their defense was near perfect. This was the first game as a new team and thus it was good opportunity to connect with each team member. The most effective player in the Opens team was Xenia, with her strong defense which encouraged the rest of the team to stay focused on the game. The Senior A team had an extremely close competitive game and even though they didn’t come away with the win they all walked off the courts with smiles on their faces as they had given their absolute best. Our 8A team had an emphatic victory and showed signs of being a very strong team in future years.

What a way to start the season! A great, well-deserved win by the Juniors this week against St Margaret’s. Congratulations to each girl for playing her heart out and giving it her all. Special mention must go to the defense line for their amazing effort in keeping that ball out of the goal. The intermediates had a great start to the season with a win against St Margaret’s. Throughout the game Maddy McClintock played extremely well and ended up scoring her first goal, and alongside her, Ruby Webster played her best game yet. Congratulations to the rest of the team for coming out on top. We look forward to playing more games and hope for a few more wins in the future. Well done girls and bring on next week! Let’s go the Roo Pen!

What a great way to start the season for 2019. The girls went up against St Margaret’s and all teams played their absolute best! Mikayla Jervis from Senior As had an outstanding game in the first half! Another outstanding performance was from Emma Chandler in 9As team whose defense throughout the game was amazing! We are so proud of all the girls who played the game in great spirit. The training sessions have certainly paid off. Looking forward to what this season has in store for us. 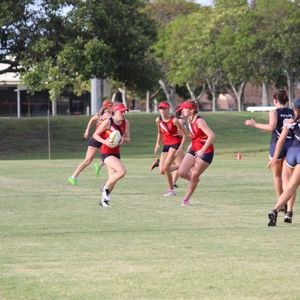 The 7A team performed brilliantly. Each player has great basketball ability, particularly with a lot of long-range shots making it in the net! The Opens team unfortunately had another close loss. Their defense was very good. Yumi Takizawa who is in the 10A team helped with scoring on the outside court and the Senior B team was a great support, cheering and dancing during the Senior As game.

What another great game played by the junior team today! Well done girls on a fantastic game against Somerville. Special shout out to the attacking line for their great communication and the effort they put into the game! Congratulations girls and best of luck for Friday’s game! We are so proud of the girls in red, gold blue, everyone played brilliantly. It was a tough game versing Somerville but in the end the Intermediates came out on top with Zoe Morison scoring the winning goal. Everyone put in one hundred and ten percent today. Hopefully we continue our winning streak!

Basketball had a lot of wins today, although we had the Cross Country, everyone played very energetically, and we could see them doing their best. Additionally, everyone seemed to be enjoying the basketball games. Next Friday will be last game of Term 1 and we hope everyone has a wonderful game like today’s!

Well done girls for giving tonight’s game your all and putting in 110%, despite the loss against BGGS. Special mention must go to the midfield group who played a very strategic game and never gave up! You have all come so far in the past few weeks and you are only getting better! Congratulations girls and keep up the hard work. The intermediate girls from the Roo Pen played an amazing game, even though we ended up with a score of 4-1 to Brisbane Girls Grammar. They played a tough game and we all look forward to playing them again next year. A massive shout out must go to Charley West as this is her second game ever and she saved more goals than anyone could have hoped for. Another shout out must go to Bella Briggs who got pushed around a bit, but didn’t give up and kept playing better by the minute. Can’t wait to sing the red, gold, blue war cry with everyone next term, we’ll get them next time girls!

For all enquiries relating to Middle Senior Sport at St Hilda’s please email sport@sthildas.qld.edu.au and ensure that you have downloaded the iStHildas App for all our sporting notices.