A solid effort from all our players coming away with dominant wins across the board.

It was another home game for St Hilda’s against Clayfield for round 3. The girls played really well and are showing great improvement week to week. The Senior B’s came away with a win against Clayfield and Senior A’s played an awesome game as well. Our 7C’s and 10C’s played great games against the BGGS girls. It was great to see the girls having fun and playing against each other as 10A, 10B, 7A and 7B had byes this week. Thank you to all the girls for turning up and supporting the girls play against the other schools.

Another wonderful weekend of QG Tennis with all teams coming away with solid wins.

Round three of winter fixtures against Clayfield College proved very successful for the volleyball girls, with the Opens, Senior A’s, 9A’s, 8A’s, and 7A’s achieving successive wins. Some incredible serves were seen from Sofia and Saffron from the Senior A’s, causing multiple time outs and concern amongst the opposing team.  The birthday girl, Anastasia Dakin, also played excellently and kept up team morale throughout the 7A’s match. The Opens team won their match decisively 3 sets to 0, which was undeniably their strongest performance of the season. All teams anticipate the first away game of the season next Saturday.

St Hilda’s had an away game against St Aidan’s for round 4. It was great netball to watch!! The girls are all improving week to week individually and as teams. It was really nice to see the support from the other St Hilda’s teams, from watching the Opens all the way to our year 7 girls. Overall, a really great round, well done.

This week we played one of the hardest teams, so it was amazing to come home with the win on Saturday. All the girls were super focused and stayed determined throughout the day no matter the result. A special shoutout to Dayna and Elise on the Open team who both won their doubles together 6-0 and their singles 6-0. They carried the win and did really well. 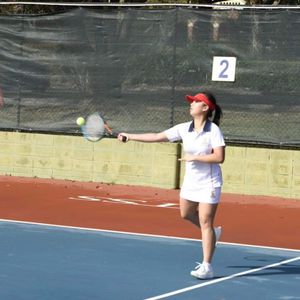 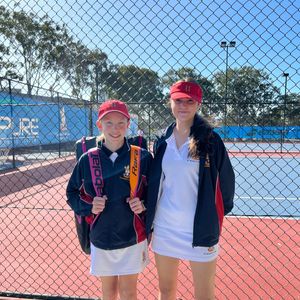 Round 4 of volleyball fixtures against St Aidan’s was highly successful, with the first away game bringing home 7 wins from the 7A, 7B, 8A, 9B, 10A, Senior A and Open teams. The 9A’s put up a strong fight and only lost by a small margin, pulling off some amazing receives and attacks. The Senior A team maintained a solid lead throughout the course of their game, with special mentions going out to Maddy’s tricky tips and an amazing foot receive from Sofia. Chryssa was made MVP of the Opens game, with her powerful serves, sets and setter dumps serving as the perfect attack combo. All teams look forward to round 5 against Brisbane Girls Grammar. 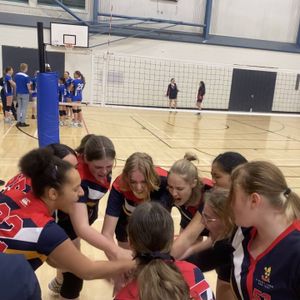 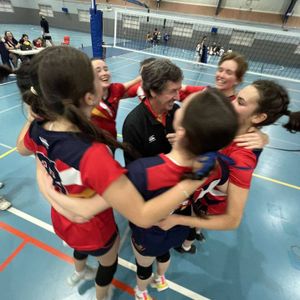 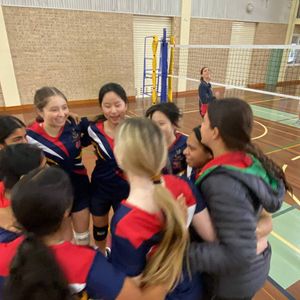 Our round 5 matchup against Brisbane Girls Grammar was a wet one, with the second round of games unfortunately getting cancelled. However, the Opens, Senior A’s and Year 7’s persevered with the early morning start to produce some awesome results. The Opens battled for a full 60 minutes to come away with a draw, which is definitely something to celebrate! The Senior A’s and Year 7’s had a tough game, and unfortunately could not produce a win but as always, played extremely well. Thank you girls for your willingness to have a crack and show some amazing support, even in the less than ideal weather conditions!

Round 5 of the volleyball season was quite a challenge for a number of teams, with tough competition seen from Brisbane Girls Grammar School. Nevertheless, the 7A’s upheld their champion streak, winning very convincingly with their excellent defense and serves. Both senior matches were very close, and some amazing service aces were seen from both Saffron and Claudia from the Senior A’s. Unfortunately, there were quite a few injuries to report, most notably that of Liv and Kylie, who were both struck by unfortunate accidents as a result of their ferocious play. All teams look forward to round 6 next Saturday. 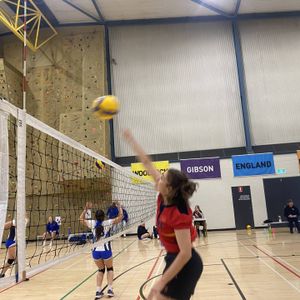 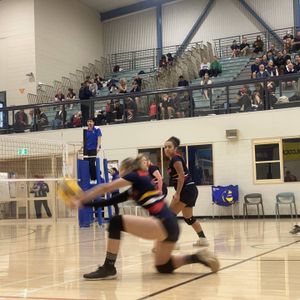 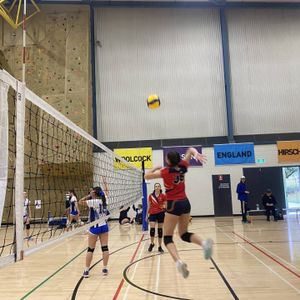 The first regatta showed a promising start to the racing season ahead!! Being hosted by our very own school, it ran very smoothly and definitely kicked off the racing season with high standards. We showed everyone what St Hilda’s can do with coming away leading with 655 points, 100 points in front of second place.

Due to the weather conditions, we started off the day with the Open crews, where the Open 4 and Third 8 took away first place. Then followed by the Year 9 division 3 and 4 also taking first place. We almost had a clean sweep for our Year 10’s, winning divisions 5, 4, 3 and 2.

A massive thanks should definitely go to all the parents that contributed towards the set-up, whether it be as small as making food to being at the dam for the day. We can’t wait to see what Regatta 2 brings. 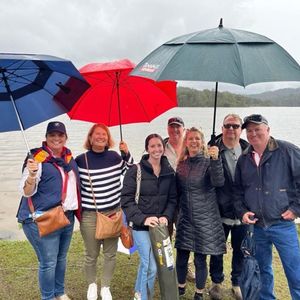 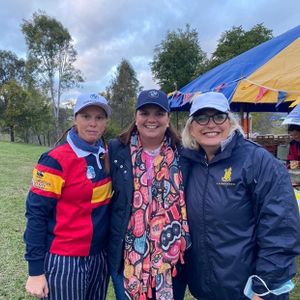 After the rough conditions at Regatta 1 left us with a bumpy start to the racing season, Regatta 2 was an opportunity to start fresh with new skills and strength. Each rower grabbed this opportunity and came home with some outstanding results, in particular the Year 10 cohort who won every division! That is the first time that the Year 10 St Hilda’s crews have had a clean sweep in race 1. A special shoutout must go to Cyra Bender, who effortlessly won the Year 11 single scull race to kick-off the regatta. It was also notable that the Year 8 rowers performed exceptionally well for their first race of the season, with the 1st, 5th, 6th, and 7th quads each taking first place. This was followed by the Year 9 3rd, 4th, and 5th quads and later the Open 3rd eight who also won their divisions. By the end of the day, it was no doubt the St Hilda’s crews stood out on the course, with 14 first places in the first race, and 25 in total.  This regatta has positioned crews well, and I’m sure everyone is excited to come back even stronger next weekend.

Thank you to all coaches and parents who helped throughout the day and ensured the girls were well prepared for their races. 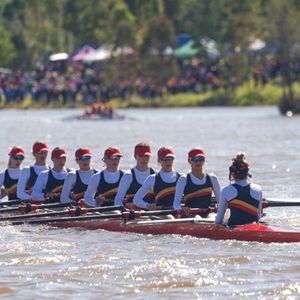 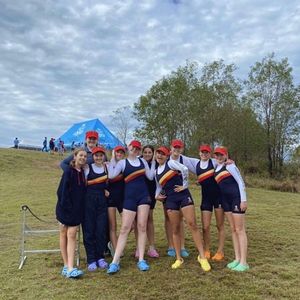 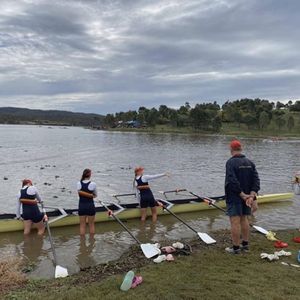 Regatta 3 was another promising regatta for the season. Regardless of some sickness and injuries, the girls still went out there and gave it their all. In the Year 8 division we took away 4/7 first round wins. The Year 8’s are showing the whole shed how much they have settled into racing being their first year, they are on fire! In the Year 9 division we had a win in the 4th division with lots of close placings in the other divisions. And yet again, we almost had a clean sweep of the year 10s, where the 5th, 4th, 3rd and 2nd came away with a win and the 1sts coming away with a win in the second round. In the Open crews, both the Open 3rd eight and 2nd eight came away with a win in the first round. Where the second eight then went on to row in the 1st eight division for the second race and came 7th out of 10 which is an amazing effort!!! Only 2 more regattas till the big one, the girls are definitely on track and are picking up the intensity in trainings.

As our rowers tick off the training and racing each week, they also tick off another week of growth, both individually and as a crew. It is amazing to see the commitment of each girl when they push off the bank, and then come down the course with such incredible results, especially in the unfortunate raining conditions on Saturday. The St Hilda’s crews continue to stand out on the course, which is evident as we managed to rack up a total of 880 points to put us in a comfortable first place overall. This is 115 points ahead of St Margaret’s in second place. This was only possible due to our outstanding results throughout the day, with St Hilda’s coming home with 13 wins in the first round, and another 8 in the second round. The Year 8’s are getting well into the swing of things, as the 5th, 4th, 3rd, 2nd, and 1st quads all placed first in the first round. This was followed by the Year 9 5th and 3rd quads who also fought hard and came home with first place. The Year 10 crews backed up their results from previous regattas, with the 5th, 3rd, 2nd and 1st quads all placing first yet again. Due to fewer numbers in division 2 for the Open eight, division 2 and 3 were joined. Our Open 2nd eight managed to cross the line in first, followed by the 3rd eight who also placed first in their division. Congratulations to all place getters, and all crews on a challenging day with unfavorable conditions. This regatta is one step closer to Head of the River, and it is exciting to see these awesome results being backed up each week.

Thank you to all coaches, volunteers and parents who braved the weather so that the regatta ran smoothly and supported the girls. 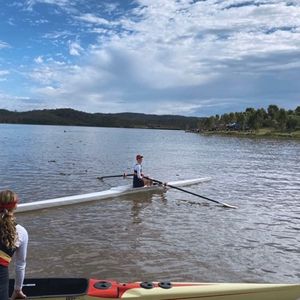 The St Hilda’s Sport Team regularly gets school sport results and achievement. The Sport Team loves to be kept up to date with our girl’s achievements across a wide range of club and non-school sports. Please email sport@sthildas.qld.edu.au with any sporting news that we can recognise and celebrate!