2020 has been the most disrupted year I have experienced in my thirty-two years as a School Chaplain. I remember in my first year in 1988, that the Boarding House of the school in which I was teaching was closed for the last week of Term 1 when many of the Boarders contracted a flu, but that was in the days when we only had three terms in the school year and often people became ill towards the end of each term. I also remember that it was a saying at the time that we always knew it was coming to the end of term by the rise in absentees.

Nevertheless, we were able to have our usual flow of Chapel Services in Term 1 but those in Term 2 were a digital expression of worship with most being taped in an empty Chapel and then put online to be watched later. Although I had students help me with the filming of House Chapels, Boarders’ Chapels were a lonely experience with just me talking to the camera as the music and images were added later by the IT Department whose skills certainly shone throughout Term 2! 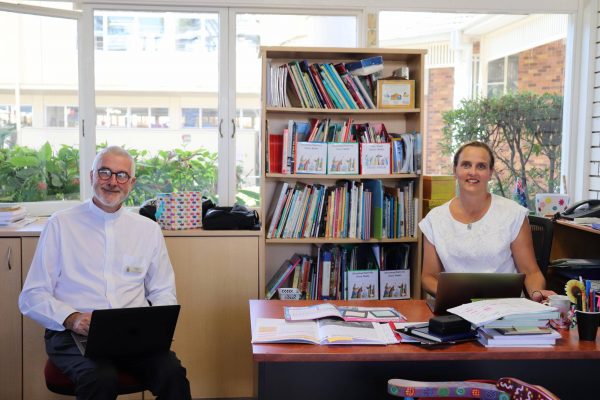 Towards the end of Term 2, we were able to have some students in the Chapel for the filming of the Junior School services. It was certainly a welcome change to hear students singing the hymns and joining in with the prayers!

We have this term been able to increase the number of students from one class to a whole cohort. It was rather strange to see the Preps socially distanced and stretching from the front pew to the back given their lack of height! Boarders have also been back in Chapel, but again only with a limited number at any one time.

In Week 4, we have first of this term’s House Chapels in the Senior School. As we have three Houses (Banksia, Karragaroo, Melaleuca) we will have three Chapel Services, all conducted at the same time. Fortunately, we have been able to enlist the assistance of two priests from the Diocese, Rev. Richard Browning and Rev. Trevor Sketcher. The theme of the services will be ‘The Golden Rule’. Not the golden rule of the School Song which speaks of “the golden rule of every school ‘play up and play the game’” but the Golden Rule which is seen in most, if not all, world religions. This is often summed up as, “Do as you would be done by,” or as Jesus said, “In everything do to others as you would have them do to you; for this is the law and the prophets.” (Matthew 7:12)

Usually in Term 3 girls in Year 4 are prepared for First Communion in their Religious Education lessons. This year, the lessons will go ahead as normal but, due to COVID-19 restrictions, the actual service when the girls take their First Communion will be held next term when hopefully we will be enjoying more normal circumstances.