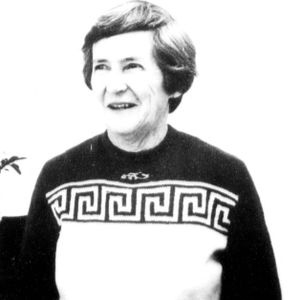 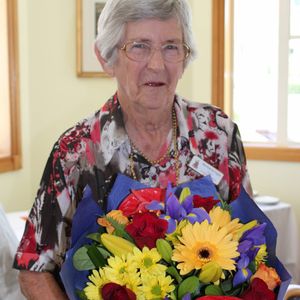 This week, we were deeply saddened to learn of the passing of Miss Rosemary Hughes, a much-loved member of our St Hilda’s community. A St Hilda’s Old Girl, Rosemary served as Secretary to the three Principals, and was an active OGA Member and Newsletter Editor. Her name is still spoken most days at St Hilda’s, as our modern living quarters for Year 12 Boarders bear her name in dedication.

An Old Girl of St Hilda’s, Miss Hughes has been Secretary to the Headmistress since 1952, and it would be impossible to do justice here to her contribution, not only to St Hilda’s, but to the Southport community as a whole. However, many will remember her involvement with the Old Girls’ Association, her skill as a chauffeur, her jewellery-making hobby groups, her skill as school archivist, her work with Girl Guides and the Gold Coast Historical Society and…Most of all, we will remember her calm good humour and her sincere interest in and loyalty to all of us here at St Hilda’s.

The St Hilda’s Old Girls’ Association are deeply saddened by the passing of Rosemary Hughes, Old Girl (1939) and would like to express our condolences to her family. Rosemary was an adored member of the St Hilda’s Community as she played such an active role in many areas of the School; from being a student to working as a secretary for three St Hilda’s School Principals and all while maintaining a strong connection and role in the OGA. Rosemary’s gracious commitment to St Hilda’s School and our Old Girls Association will be remembered for many years to come.

Rosemary Eleanor Hughes was born at Atherton North Queensland in 1922. She is second born of the six children of North Queensland pioneer Alfred Lucas Hughes and English born Dorothy Vyvyan.

Her father Alfred was instrumental in the development of north Queensland. Having acquired an interest in ‘Southedge’ cattle station, he formed the Daintree River Development Company with Tom Kilpatrick and together they forged pioneering efforts in the area.  Although the family home was at Mareeba, Mrs Hughes’ aversion to the hot Queensland summer meant that the whole family moved to Daintree at the end of March each year and returned to Mareeba in November.  This interrupted the school year and Rosemary’s early education was shared between the two settlements.  At Daintree, she attended a one-teacher school.

To celebrate her passing the State Scholarship Examination, Rosemary’s father took both she and her brother Charles for a joy flight with Tom Macdonald, pioneering airman of the district, over the Barron Falls, Southedge Station, Mareeba and Cairns.

At the beginning of Year 9, Rosemary was sent to board at St Hilda’s. Her father had relatives living at Southport in Seabank house, a large residence facing Marine Parade. The Seabank commercial building stands on site today.

In 1939, having completed Year 11, Rosemary enrolled at Business College in Brisbane and boarded at Archibald House, a Methodist Youth Hostel in New Farm. After graduating, she took her first job with the Brisbane based Adelaide Steamship Company. Being wartime, any available passenger liners were commandeered as hospital ships to sail between Brisbane and New Guinea. Turning the ships around from one port to the next was hectic.

During WW2, doing her bit for the war effort resulted in Rosemary joining the Voluntary Aid Detachments (VADs) who carried out a range of voluntary positions including nursing, transport duties, and the organisation of rest stations, working parties and auxiliary hospitals. She trained weeknights, worked weekends in the hospital and waitressed at St George’s Café for service men in Edward St, Brisbane.

Following the war time death of her father from ptomaine poisoning, Rosemary’s mother moved to Southport to be closer to the Hughes relatives.  Taking the opportunity to once again be close to her mother, Rosemary resigned her Brisbane job and found work with the Electricity Department. Undaunted by the expectation, Rosemary quickly memorised the name of every street between Southport and Coolangatta and as the Gold Coast grew she drew maps and learned new names.

In 1949, Rosemary and her sister Norah went to England by ship. The journey took 7 weeks and she stayed abroad for about 2 years, cycling around England, and visiting relatives. She worked as live-in help and nanny for a wealthy family.

In 1952, Miss Horton, the newly appointed Principal of St Hilda’s came to England and met Rosemary in London. She asked her to return to Southport as her Secretary. Miss Horton had previously taught Rosemary and thinking that it was time she returned to Australia, Rosemary accepted the offer. This started Rosemary’s long association on the staff of St Hilda’s.

“When Miss Horton was appointed as Head, she had 6 months overseas first and met me in London and asked me to come back as her Secretary. I had been in England for 3 years so was ready to come home,” said Rosemary.

Reflections from Rosemary in the 2012 St Hilda’s Centenary Book.

Rosemary worked under three Heads of St Hilda’s and knew every Principal of the school.  She retired in 1984, returning briefly in 1986 to compile the 75th anniversary book, Memories of St Hilda’s School Southport.

In Memories of St Hilda’s School Southport, Rosemary described her role as Secretary.

“When I first began, I was the only typist in the school and my jobs were varied. Besides Secretarial work, I had lunch with the Boarders and did duty taking a table, then returned to the Office to help deal with the Boarders wanting stamps, parcels, messages, etc. – no such thing as a lunch break but I had all school holidays.

“I often filled in by supervising a class and even took on teaching shorthand and bookkeeping when the Commercial teacher was in hospital. At one time, I taught sewing to the Grades 1 & 2 and, in later years with Miss Granowski, I enjoyed taking a hobby class on Friday afternoons. I went on several camping trips with girls and generally became involved with many activities. I retired at the end of 1984, having known all the Headmistresses – I met the first as a pupil, was taught by the second and served under the next three.”

St Hilda’s fifth Principal, Jennifer Reeves, describes Rosemary’s impact on not only her own role, but the day-to-day running of the School:

“The other person who was instrumental in training me for this new role was Rosemary Hughes, secretary to the Headmistress. Rosemary had held that position for some considerable time and I was her third Headmistress. As she had also been a student at the school, she was extremely knowledgeable about all practices and procedures and was aware of all the school’s traditions and history. Even more useful to me was her encyclopaedic knowledge of families and family connections.”

In later years, Rosemary continued to volunteer her service, memories and expertise in the school archives and remained an active member of the OGA. Up until late 1994, OGA newsletters and all other correspondence were hand typed and occasionally handwritten for many years by Rosemary in her role as Secretary to the Headmistress. This would have been a time-consuming task.

When she returned to St Hilda’s to assist with the 75th anniversary preparations in 1986, she also became the official Old Girls’ newsletter editor. Rosemary held this position and that of newsletter reporter until her second ‘retirement’ in 2004.

Rosemary Hughes exemplified our School motto, Non Nobis Solum, not for ourselves alone, and will be remembered as a friend, colleague and key figure in St Hilda’s history.

Rosemary continued to live on the Gold Coast at Runaway Bay and kept in touch with many Old Girls, past teachers, and staff, meeting regularly to have coffee and a catch up in Southport. Rosemary retained strong friendships across many decades. She often joined other Old Girls at Toowoomba lunches and chatted to all age groups about their and her time at St Hilda’s.

Rosemary rarely missed an Old Girls’ Association meeting; she was a staunch supporter. Her depth of knowledge of the School and the OGA and its history was unparalleled, and she ensured each committee was well versed in how things worked. Although one of the older members of the Association, Rosemary was also quite accepting of the changes which inevitably occurred with each new committee.

The OGA was delighted to be able to host a special 90th Birthday High Tea celebration for Rosemary at the Marriott in 2012. Never one to seek the spotlight, she thoroughly enjoyed seeing so many gathered in her honour. 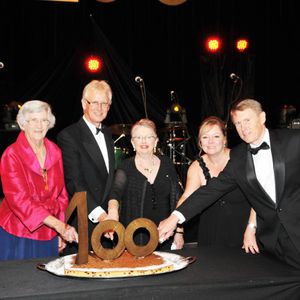 Left to Right: Rosemary at St HIlda’s Centenary Celebrations; Rosemary at her name on the Centenary Wall with fellow Old Girl, Debbie Buckley; Rosemary in the Boarding quarters that bear her name.

Rosemary had many outside interests including bird watching and embroidery. She spent many hours wandering the Gold Coast hinterland looking, listening out for and identifying a variety of local birdlife. This hobby kept her very fit and healthy. Many feel her real skill lay with a needle and thread. Rosemary was an exquisite embroiderer. She was responsible for several pieces of embroidery which adorn the chapel at St Hilda’s and had many beautiful pieces on her walls at home. Rosemary was a member of the local Embroiderers Guild which met at Owen Park around the corner from St Hilda’s and took out the Embroiderer of the Year several times during her membership.

Rosemary spent her final years at a Runaway Bay Nursing Home. She would have turned 98 later this year. The St Hilda’s Community is indebted to Rosemary for her service to the School and the OGA and we remember her with great fondness.

May you Rest in Peace, Rosemary.

We would love to share memories of Rosemary with our community in the next edition of the Old Girls’ Association Spirit Magazine. We welcome you to email oldgirls@sthildas.qld.edu.au with any memories you wish to share.